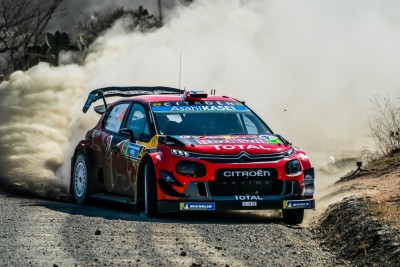 Citroën Total WRT crew Esapekka Lappi and Janne Ferm will start in Shell Helix Rally Estonia which is for the first time official WRC promotional event. Rally Estonia is held on 12-14 of July in South Estonia. Lappi and Ferm with Citroen C3 WRC is the first WRC crew from WRC manufacturer team in this year’s entry list. As the conditions are similar to Rally Finland the Finns are definitely fast and one’s to watch for overall victory. Lappi and Ferm have competed in Rally Estonia 2014 with S2000 car. They ended fifth overall.

Starting from this year are they driving for Citroën Total WRT and are currently 8th in WRC drivers standings. Their best result this year is second place from Rally Sweden.

Esapekka Lappi: “Rally Finland is obviously very important to me. I am happy to be able to take advantage of this additional chance to drive, in order to approach the leg as prepared as possible, and because the Estonian stages have so many similarities to those in the Jyväskylä region and the local fans show us such an enthusiastic welcome.”

Pierre Budar, Citroën Racing Team Principal: “We had an especially warm welcome while we were here last year, and the very real conditions of this testing round helped a great deal as it contributed greatly to the second place we then secured in Finland. It is now with this same objective that we return with Esapekka in order to prepare him for the WRC round on his home soil as much as possible and to gain data that will be beneficial to Sebastien.”

The fact that Esapekka Lappi and Janne Ferm and Citroën Total WRT are starting in Shell Helix Rally Estonia is important for Citroën importer in Baltic states, Veho Eesti AS.

Mihkel Vaks, member of the board Veho Eesti AS: “Once again we’re glad to welcome official Citroën Total WRT team competing in Estonia. In cooperation with rally organizers and other importers we contribute all together that Estonia will be favored destination to held official WRC promotional event. Continuous enthusiasm from WRC manufacturer teams is a sign that in the future can Estonia host official WRC round.”

Director of Shell Helix Rally Estonia Urmo Aava adds that they have longer and productive cooperation with Citroën.

“The fact that we have Citroën team third time in Estonia is a sign of trust and the feedback has been constructive. Esapekka Lappi and Janne Ferm are very popular among Estonian rallyfans and we hope to see many supporters from Finland too. Like the constructive cooperation with Citroën Total WRT the cooperation with Citroën importer in Baltics, Veho Eesti AS has been and I hope will be in future same,” said Urmo Aava, director of Shell Helix Rally Estonia.

Shell Helix Rally Estonia 2019 is held on 12.-14. July 2019 in Tartu, Otepää, Elva, Kanepi and Kambja. It is a round of Estonian, Latvian and FIA European Rally Cup and Official WRC promotional event.