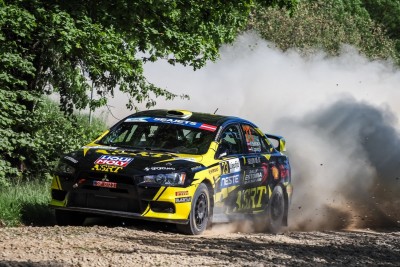 Ralfs Sirmacis, winner of Rally Estonia 2016 and one of the fastest Latvian rally drivers is coming back to Estonia. He and Ralfs Igavenš will start at Shell Helix Rally Estonia held on 12-14 of July. Fresh winners of ERC 2 category at FIA ERC Rally Liepaja will drive this time Mitsubishi Lancer EVO X prepared by Latvian team ASRT. The participation of Ralfs Sirmacis and Ralfs Igavenš at Official WRC Promotional event is in cooperation with Pirelli and Sportland.

Ralfs Sirmacis: “Shell Helix Rally Estonia is still my favorite rally. It is fast, with jumps and corners which makes it very enjoyable. Of course I wanted to drive it once again with R5 car but I’m sure it will fun with Mitsubishi Lancer EVO too. In Rally Liepaja we saw that we have the pace and we will give our maximum at Rally Estonia.”

Urmo Aava: “It is great to see our 2016 winner Ralfs Sirmacis back in Estonia. I’m sure that the experience he has from our event will help him to show competitive pace. I believe also that Ralfs Sirmacis and Ralfs Igavenš and other Latvian drivers will receive great support from Latvian fans who will travel to Estonia as Shell Helix Rally Estonia is a round of Latvian championship too.”