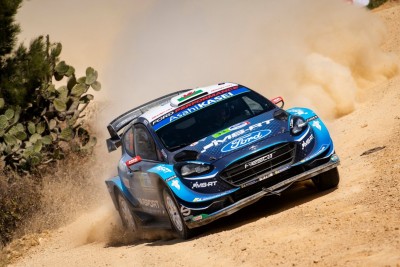 Elfyn Evans and Scott Martin from M-Sport are the next WRC Manufacturer Team starting at Shell Helix Rally Estonia which is the first official WRC Promotional event. Evans and Martin, currently 4thin WRC overall classification are ready to tackle the stages with Ford Fiesta WRC. M-Sport is the third WRC Manufacturer Team who announced their participation in Shell Helix Rally Estonia. Earlier Esapekka Lappi-Janne Ferm and Andreas Mikkelsen-Anders Jaeger-Amland have announced their participation in the event held on 12-14 of July in South Estonia.

Elfyn Evans has won one WRC event, it was 2017 Wales Rally GB with Dan Barritt. He has achieved nine WRC podiums. For Evans it is the first time to start at Rally Estonia, but his co-driver Scott Martin is starting at Rally Estonia for the third time. Last year he finished third together with Craig Breen. M-Sport competes in Estonia for the first time but the roads in South-Estonia are familiar to the team as they tested in Estonia in 2017. Elfyn Evans has good memories from that test and the Estonian stages.

Elfyn Evans:“I’m pretty excited to be driving at this year’s Rally Estonia. I’ve never competed here before, but I’ve heard so many good things about the rally and I can’t wait to experience it for myself.

“The Estonian stages won’t be completely new to me though. We tested in Estonia back in 2017 and I can confirm that the roads there are fairly impressive! They’re so fast, and this will be the perfect way for us to get up to speed before heading to our pre-event test in Finland.”

Richard Millener, Team Principle of M-Sport admits that Rally Estonia in very well known in WRC. As the popularity of rallying in Estonia is huge, M-Sport is coming to Estonia with high hopes.

Team Principal, Richard Millener:“Rally Estonia has become one of those events that everyone wants to do. We’ve had a number of customers compete there, and we’re really exciting to be bringing Elfyn and the EcoBoost-powered Ford Fiesta WRC this year.

We know how passionate the Estonian fans are and with WRC manufacturers sending a top-level car and crew, the atmosphere is going to be incredible – I can’t wait to experience it for myself!

It’s going to be pretty special, and it’s also the perfect way to get Elfyn and Scott up to speed ahead of their Finland preparations.”

Adding M-Sport with Ford Fiesta WRC to the entry list is a big thing or the rally organizers.

Urmo Aava, director of Shell Helix Rally Estonia:“The fact that we have created an event which is well known in WRC is a compliment to us. M-Sport team starting with Ford Fiesta WRC driven by Elfyn Evans and Scott Martin is important for us as it is their first time here. On behalf of the organisation I would like to offer them great conditions and strong competition. M-Sport has done fantastic work with Ford Fiesta WRC and I’m sure our stages suit both to the car and Elfyn and Scott. I am looking forward to see their pace at Shell Helix Rally Estonia.”