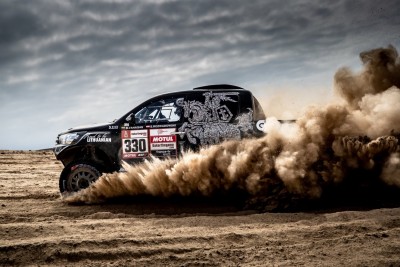 •          Toyota Gazoo Racing Hilux for the first in Estonian rallies

The spectators of Shell Helix Rally Estonia held on 12.-14. of July are privileged to see for the first time Dakar Toyota Hilux in action on the stages of Official WRC Promotional event. Benediktas Vanagas who achieved this year 11thplace in Dakar, which is best Baltic result, will drive Toyota Gazoo Racing Hilux as a zero car.

This car is specially prepared by Toyota Gazoo Racing South Africa for Dakar. Four wheel drive Hilux weights 1950 kg and has a 5,0 l V8 engine from Lexus. It produces 360 BHP and the top speed is 190 km/h. Vanagas has started at Rally Estonia several times but this year has he one more important role as zero car keeps an eye on safety and security on the stages.

„Rally Estonia will feature two "first times" during two decades of being a rally driver: the first is the zero car on the track with an important mission on safety. The second - that I have not participated in a classic rally with cross-country car. So far, this is the closest geographic opportunity in Baltics to see best Baltic Dakar result Toyota Gazoo Racing Hilux on track.“

“We have a lot of positive memories with Benediktas starting in our event over the years. He is well known in Lithuania and I’m sure many fans will follow him to Estonia. We are glad that we can offer once again something different to the spectators and for sure it will be spectacular. Those cars are rare in Estonia to see. I know Benediktas and his attitude and I’m sure he will take his work as an official very seriously.”