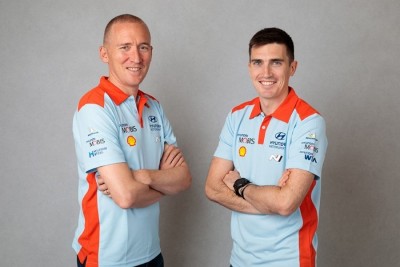 Hyundai Motorsport announced today their drivers for Rally Finland and third car will driven by Craig Breen and Paul Nagle. Part of their preparation before Rally Finland is Shell Helix Rally Estonia, an Official WRC Promotional event held on 12-14 of July in South Estonia.

For Craig Breen is is already fourth time to start at Rally Estonia and last year were they with Scott Martin on the podium when they achieved third place with Citroen C3 WRC.

“I am chuffed to be given this chance,” said Craig. “It’s been a long and patient wait, having to watch everyone else drive this year. I am honored to have this one-off opportunity with Paul as my co-driver.”’

The Irishman took his first WRC podium in Finland in 2016, and has competed there each year since 2009, with the sole exception of 2013. He will have sufficient opportunities to get up to speed ahead of the WRC event. A seat fitting will be followed by a pre-event test, as well as participation in Rally Estonia (July 12-14). Andreas/Anders will also join that event as representative preparation for the fast Finnish stages.