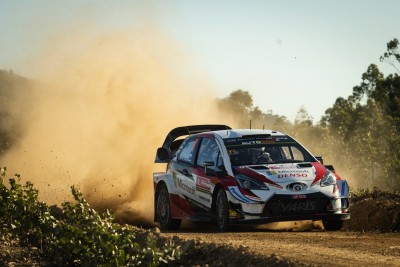 Ott Tänak and Martin Järveoja are current leaders in WRC after eight round. They have won three rallies this year and with 9 WRC wins in total are they most successful Estonian rally drivers. Starting at Shell Helix Rally Estonia it’s important for them for many reasons.

“I’m really happy that we can return to Rally Estonia this year and drive the Toyota Yaris WRC on our home roads again. It is nice to see the event getting stronger every year, and this time it looks as though the competition is going to be even tougher, with every WRC team taking part. I know from last year that competing on these fast roads is really good preparation for us and the team before Rally Finland. But above all, it was a great feeling to win in front of so many of our fans and I hope we can bring them the same enjoyment this time.”

“We are pleased to be competing on Rally Estonia again this year with Ott and Martin. We see so many Estonian fans supporting us on rallies all around the world, so it is great for us to compete in front of them. Last year, Ott and Martin won Rally Estonia and then dominated in Finland a few weeks later, so I’m hoping that it can have a similar benefit this year!”

Marek Maide, Member of the Board Toyota Baltic AS:

„Toyota Baltic is extremely happy that already for the second year Ott Tänak and Martin Järveoja  will represent Toyota GAZOO Racing at Shell Helix Rally Estonia which is this year an Official WRC Promotional event. As we saw from the last year’s event this format was very useful for whole Toyota GAZOO Racing team. The opportunity to test Toyota Yaris WRC in Estonia lead to the victory in Rally Finland. For the fans it’s Rally Estonia the closest opportunity to see WRC top drivers and teams in competition and of course to cheer Ott and Martin on the stages. We believe that Ott, Martin and Toyota Yaris WRC can celebrate their victory at Shell Helix Rally Estonia like last year.”

Urmo Aava, Director Shell Helix Rally Estonia:
“At this moment it is very hard for me to find the right words. For the moments like this have we worked hard with our team through all the years. I believe that we will see tens of thousands spectators cheering all the drivers at Shell Helix Rally Estonia. The level of WRC drivers and competition is extremely high this year. We appreciate the effort from every team and from our side we do everything possible to give good emotions to drivers, teams and fans through all the weekend. Ott and Martin are coming Shell Helix Rally Estonia as the leaders of WRC and I hope that the good feeling they will get from here helps them to continue the second half of WRC season with victories. And to step forward to their goal – to win World Champions title!”

Rally passes are available on Shell Helix Rally Estonia official website rallyestonia.com until the end of June with the special price of 29 euros. From July the price of the rally pass is 34 euros.