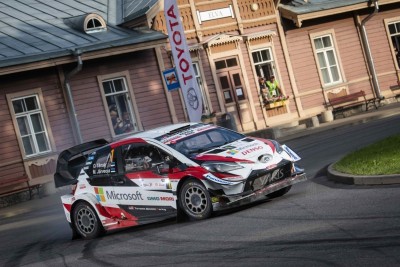 Tänak and Järveoja had a strong start of the day winning two first stages. They expanded their gap with almost every stage and after the last stage was their advantage 33,4 seconds ahead of Andreas Mikkelsen and Anders Jaeger-Amland (Hyundai i20 Coupe WRC).

“It has been a busy day. Many times, in the service and the weather was changing much. It has been a challenge, but we have learned a lot today.”

Third after day 1 are Esapekka Lappi and Janne Ferm from Citroen Racing (+46,3), fourth M-Sport drivers Elfyn Evans and Scott Martin (+1.09,2). They had a heavy landing in one jump and damaged a car a bit and lost time. In the fifth place are Craig Breen and Paul Nagle from Hyundai Motorsport (+1.12,7). TOP 6 is completed by the leaders of R5 class, Oliver Solberg and Aaron Johnston (Volkswagen Polo R5). Only 6,4 seconds separates Solberg and Markko Märtin and Kristo Kraag (Ford Fiesta WRC).

Next drivers in TOP 10 are with R5 class cars. Second in this class are Rainer Aus and Simo Koskinen (Škoda Favia R5), losing 1.09,5 to Solberg and 8,9 seconds ahead of Eerik Pietarinen and Juhana Raitanen (Škoda Fabia R5). Overall tenth and fourth in R5 are Teemu Suninen and Jarmo Lehtinen with all-new Ford Fiesta R5, losing to Pietarinen with 3 seconds.