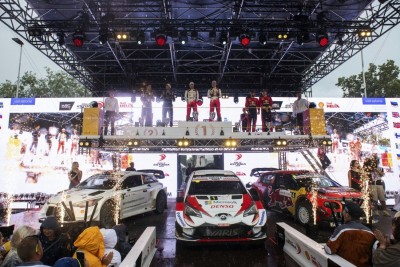 Shell Helix Rally Estonia winners are Ott Tänak and Martin Järveoja! Driving Toyota Yaris WRC Tänak and Järveoja climbed the highest place of the podium and became to be the first winners of Official WRC Promotional event. The trophies were presented by Samuel Redondo, Shell Shell Business Manager Europe Ari Vatanen, World Champion and the president of Estonian Autosport Union. The winner’s trophy helmets were presented by Urmo Aava and Tarmo Hõbe, the organizers of Shell Helix Rally Estonia. Thousands of people were cheering the drivers on the podium.

On Sunday there were no chances in top 3. Tänak and Järveoja won ahead of Hyundai Motorsport drivers Andreas Mikkelsen and Anders Jaeger-Amland with the gap of 1.03,5.

“"It was a great weekend we can see the amount of people we have here. It's definitely a rally nation and I believe it's great to have this event here and the manufacturers. A lot of work going on in the background and it's an accomplishment. (Finland) Will be difficult first on the road."

„When I first had an idea to start here, it seemed a good one. Then I had different thoughts and then Ott talked me over. Today, here on the podium I think it was a good idea. It was fun to try this new car and see how Rally Estonia has improved. Also, the amount of people was amazing.”

In R5 cars category were the winners Oliver Solberg and Aaron Johnston (Volkswagen Polo R5). In overall were they seventh. Rainer Aus and Simo Koskinen (Škoda Fabia R5) held back the attack from Eerik Pietarinen and Juhana Raitanen (Škoda Fabia R5). The gap was only 2,2 seconds.