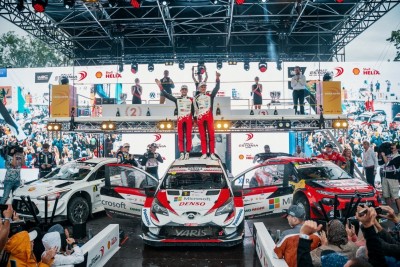 After nine successful Rally Estonia events Shell Helix Rally Estonia celebrates its tenth event in 2020. The dates are set, and the official WRC Promotional Event Shell Helix Rally Estonia 2020 is held on 24-26 of July on the roads of Tartu, Otepää, Elva, Kanepi and Kambja. The tenth event is a milestone for the biggest autosport event in the Baltics, the first rally was held in 2010. During this time Rally Estonia has been awarded as the best event in FIA ERC European Championship. Starting from the first rally the aim has always been to organize an event which is not only best but innovative and with strong competition. Having started as an Estonian championship round Rally Estonia is now an Official WRC Promotional Event with top teams and drivers from WRC.

„As soon as the WRC calendar was published, we started communicating with the WRC Promoter and WRC teams. There were not so many choices because we see Shell Rally Estonia as a test before Rally Finland and we have witnessed that the drivers who have started in Estonia have been fast in Finland. The best examples are 2019 World Champions Ott Tänak and Martin Järveoja, two-time winners of Shell Rally Estonia and also two-time winners of Rally Finland. The dates of 2020 Rally Estonia mean that we are one week after Rally Safari and two weeks before Rally Finland. We have spoken with the teams about the dates too and received the feedback that those are the best possible dates for Shell Helix Rally Estonia. We suggest everybody to start booking accommodation and we welcome you once again in Estonia!”

Also, the official numbers of the unique spectators in 2019 are available. Total 52 234 people were onsite, 10 054 of them at the opening ceremony in Tartu on Friday evening. The most popular stage was Rüa with 20 075 spectators. The Official WRC Promotional Event Shell Helix Rally Estonia 2020 is held on 24-26 of July on the roads of Tartu, Otepää, Elva, Kanepi and Kambja.