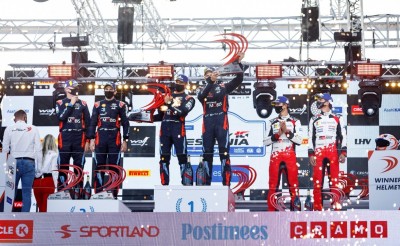 He led most of the way to win the three-day gravel road Rally Estonia by 22.2sec in a Hyundai i20. Team-mate Craig Breen completed a 1-2 for Hyundai Motorsport and matched his career-best result.

Tänak was the pre-event favourite and after taking the lead early in Saturday’s opening leg, the Estonian was never headed. But his bid for a maiden victory with the Korean manufacturer almost came unstuck in the penultimate speed test.

He swiped a bank with the rear of his i20, but the damage proved cosmetic only and he eased through the final special stage to secure his first victory for the team.

“To be in the bush and then bring it home, I’m happy to win with Hyundai for the first time,” he said. “We had some previous knowhow and if you race at home, even if you don’t know some roads, you feel the support you get from the people around. It’s a great feeling.”

Tänak climbed to third in the championship, 13 points behind leader Sébastien Ogier. Second for an emotional Breen enabled the squad to close the gap to manufacturers’ series leaders Toyota Gazoo Racing to five points.

Breen finished only 4.7sec clear of Ogier, admitting his attempt to measure his pace in the final stage allowed the Frenchman to come closer than intended. It was, however, a hugely impressive performance from the Irishman who is not a regular WRC starter.

Ogier headed a trio of Yaris finishers, satisfied that a podium keeps his hopes of a seventh world title on track, but disappointed he did not have the grip to match Tänak’s pace on Saturday afternoon.

Elfyn Evans and Kalle Rovanperä were fourth and fifth, both losing time with tyre troubles. Rovanperä incurred a 60sec penalty last night for working on his car in a prohibited zone, but the 19-year-old earlier became the youngest driver to lead a WRC rally at just 19.

Takamoto Katsuta rolled out of what would have been a career-best fifth place. His error promoted the Ford Fiestas of Teemu Suninen and Esapekka Lappi to sixth and seventh, the Finns swapping places after Lappi lost time with a big spin.

Round five takes crews to Rally Turkey which is based in Marmaris on 18 - 20 September.