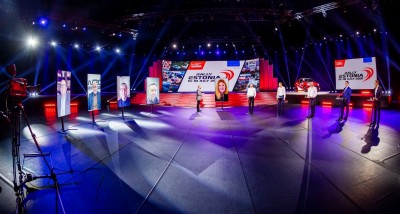 WRC Rally Estonia 2020, the first ever Estonian WRC round was a success. On Wednesday, January 13, 2021 an agreement between WRC Promoter and Rally Estonia was signed by Managing Director Jona Siebel and Rally Estonia Commercial Director Tarmo Hõbe. Estonian Prime Minister Jüri Ratas announced at the press conference that Rally Estonia has joined the WRC calendar for 2021 and 2022.

The two-year contract is a sign of trust from the FIA and WRC Promoter to the Estonian government and Rally Estonia organising team. As a sign of recognition, Prime Minister Jüri Ratas presented Estonian e-residency to FIA Rally Director Yves Matton, Managing Director of WRC Promoter Jona Siebel and President of the Estonian Autosport Union Ari Vatanen. All three were participating at the press conference online and e-residency enabled them to sign the contracts digitally during the press conference.

Jüri Ratas, Prime Minister of Estonian Republic: “It was an honour to announce that Rally Estonia is a part of the WRC calendar in 2021 as well as 2022. It shows that we have earned a trust of the stakeholders. The fact that we managed to organise a safe Rally Estonia with no infections was highly rated both internationally and here in Estonia. My congratulations to the organisers, partners and all the rally fans in the world. I’m sure that Estonia’s position in rally world will strengthen.“

Yves Matton, FIA Rally Director: „It is a part of the process and long commitment from Estonian Autosport Union and Rally Estonia organisers. They are involved organising rally since 2010 trying to achieve high level events. They were part of European championship. After that they deserved a right to organise WRC Promotional Event. It was success where all the manufacturers were involved. In 2020 under special circumstances, they were able to organise WRC event. They showcased that they really have the high level of competence and bringing new ideas and fresh approach to the series. They convinced FIA, WRC Promoter and all the stakeholders that this event has the level to join the calendar for 2021 and 2022.”

Jona Siebel, WRC Promoter Managing Director: „There were many factors which led to this agreement. First of all, the performance of last year’s event was one of the key aspects here. The second factor is the passion, especially the passion of the Estonian rally fans which is really great. Of course, that played a big part in Ott Tänak’s and Martin Järveoja’s World Championship titles for sure. And the third factor is commitment. It’s all about the commitment. Our understanding is that all Estonia is committed. The government, the whole organising team, the fans. Everybody is committed. Two years is a clear signal from FIA and WRC Promoter, it fits.”

Ari Vatanen, President of Estonian Autosport Union: „The organising team of Rally Estonia has done superb work. And we know they were capable of organising top-class events. The situation in the world last year pushed some processes to move faster and the dream became a reality. The Estonian Government, especially Prime Minister Jüri Ratas play a big part in the success of last year’s Rally Estonia and in this agreement. The support from the government is very important. What I have seen here is a great team spirit in everything. This team spirit brought WRC to Estonia and I believe it can keep WRC in Estonia.”

Urmo Aava, Rally Estonia Director: „Ten years ago it seemed impossible to organise a WRC event in Estonia. But we wanted to be better every year and it keeps our focus sharp. I believe that we have still room for improvement almost everywhere. We understand what and where we must do, and we are already working to deliver another great event. We have a unique opportunity to start a tradition here. Our goal is not just two years in the calendar, our goal is a longer success in WRC.”

The second edition of WRC Rally Estonia will run on 15-18 July.