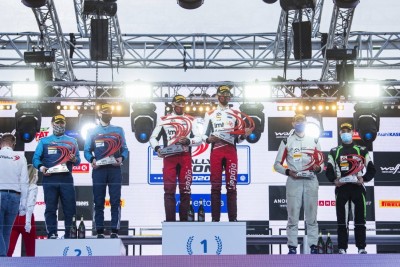 2021 is the 20th anniversary of Junior WRC and following an incredible debut event in 2020, Junior WRC is looking forward to returning to Rally Estonia in 2021.

Although Rally Estonia only made its Junior WRC debut in 2020 Estonia has always been a keen supporter of Junior WRC through helping and partnering with young Estonian drivers. In total, since Urmo Aava blasted onto the Junior WRC stage in 2003, Estonia-supported crews have taken seven wins, 31 podiums and 125 stage wins in Junior WRC. Support is also provided through the Estonian Rally Championship in partnership with M-Sport Poland, in recent years the Estonian Junior Champion has received a Junior WRC scholarship to provide young drivers such as Ken Torn and Robert Virves the opportunity to fly the Estonian flag high on the world stage.

Although Estonia’s first WRC event marked the sport’s return from a global lockdown with limited spectators the atmosphere in Tartu in September 2020 was electric. thanks to the organiser’s passion and enthusiasm shining through. A particular highlight was having two Estonian crews fighting for the lead with Ken Torn and Robert Virves with their co-drivers Kauri Pannas and Sander Pruul. Much to the delight of Estonia’s beaming fans, both drivers claimed stage wins on the event with Virves leading for ten stages in a row. Virves went on to claim his first ever Junior WRC podium on his Junior WRC debut, all on his home event with the support of Estonia’s ever strong rally community.

"Last year we got to see an incredible Junior WRC debut from Robert Virves who stunned us all with his speed and the support he received from all of Rally Estonia’s enthusiastic supporters. The numbers emphasise Estonia’s support for Junior WRC with 11 different drivers making a total of 99 starts, it’s quite nice to see that Robert Virves will mark 100 starts for Estonia on Rally Estonia this year.”

Urmo Aava, Rally Estonia Director and former Junior WRC Driver (2003-2007):
“Back then (when I drove) we couldn’t imagine the support that young drivers get today and we wouldn’t dream of the WRC coming to Estonia. Now both things are reality!

"We are happy to support Junior WRC because Estonia is investing in the future. As long as the FIA, WRC Promoter and M-sport does such a great job to bring the series together year-by-year, we are proud to be part of it and we will see many more future Rally Champions entering the world stage like this.”