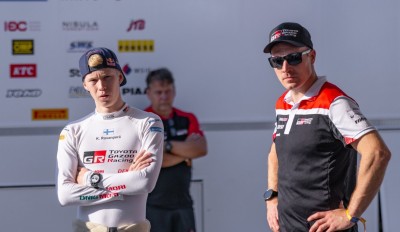 Kalle Rovanperä stands on the verge of becoming the youngest event winner in FIA World Rally Championship history after a sublime second-leg drive at Rally Estonia on Saturday.The 20-year-old Finn, who now calls Estonia home, distanced Craig Breen through nine super-fast gravel tests near Tartu to extend his advantage from 8.5sec to 50.7sec with just one day remaining of this seventh round.

The pair fought tooth and nail in Friday’s opening leg, but Rovanperä took control today. He made a sensational start in his Toyota Yaris, winning the opening Peipsiääre speed test and beating third-fastest Breen by 14.3sec. His advantage climbed to 35.7sec by mid-leg service after four stages and Rovanperä enjoyed the luxury of a measured approach during the afternoon’s dusty and heavily rutted repeats.

“Yesterday the time gaps were small but today we could make them much bigger,” said a delighted Rovanperä. “I was preparing a lot for the first stage. I knew it can be a stage where you can make a big difference and we made a good effort there.
“We still had so many kilometres left that you can’t really ease off, but after that I could be a bit more sensible.”

Breen, for whom second would match his result last year in Estonia, survived a major scare in the short closing stage when he hit a rock on the inside of a right bend. The Irishman was fortunate to limp his Hyundai i20 into service nearby with an oil leak and suspension damage. He had 30.2sec in hand over team-mate Thierry Neuville who had the better of championship leader Sébastien Ogier. The pair traded times all morning but Belgian Neuville pulled clear this afternoon in his i20 to end with a 17.9sec advantage.
With his eye on increasing his lead in the points, caution was Ogier’s watchword and the Frenchman finished with a 23.4sec margin over Yaris team-mate Elfyn Evans in fifth. The Welshman had no problems but lacked the edge to match the pace of those ahead. Teemu Suninen retained sixth in his Ford Fiesta, despite spinning into the forest in the opening test, with Pierre-Louis Loubet closing out the top-tier runners in seventh in an i20.

Ott Tänak restarted after retiring yesterday and the Estonian was the master of his home roads in his i20. He rattled off six straight stage wins to show what could have been had he not speared off the road and damaged two tyres.
Alexey Lukyanuk has won every stage in the WRC3 category to claim an impressive eighth overall, with WRC2 leader Andreas Mikkelsen and Mads Østberg completing the top 10.