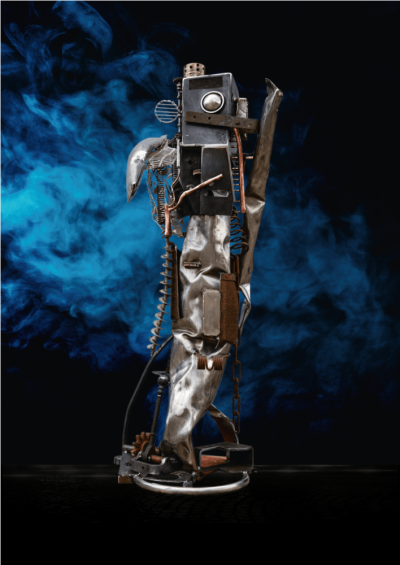 On the opening day of the rally WRC drivers attending Rally Estonia signed the sculpture "Nutikas Kratt" ordered by the main sponsor Cronimet, which will be sold at the charity auction and the sales revenue will be donated to the children of the Ukrainian war refugees.

"It is a unique artwork and support action by the international rally community for the Ukrainian war refugees," Tarmo Hõbe, Commercial Director of Rally Estonia, said. "I believe that rally fans appreciate such an opportunity and there is a lot of interest towards the auction."

You can make an auction offer in Osta.ee environment here: https://bit.ly/3nSZbdV

Sculptor Kalle Pruuden's two-metre "Nutikas Kratt" made of scrap metal is open for auction offers in osta.ee environment during 11-20 July. The figure was ordered by Rally Estonia's main sponsor Cronimet, which deals with redirecting scrap metal to a new life cycle. The company points out that in addition to the usual process in melting furnace, metal can also be given a new life in the artworks. According to Kalle Pruuden the idea of ​​the sculpture was born from a charitable thought - the children of Ukraine.

"Based on this I also chose the material. I already had the general form in my head then, I knew that we needed a couple of large-sized elements giving the basic form, to which we would add the details made of different materials with the most versatile forms possible," Kalle Pruuden said.

According to the sculptor "Nutikas kratt " is essentially like a character from the virtual world or computer game called to the real life. "The work includes allusions to the computer and digital world that is so characteristic of teenagers," Pruuden says. “The goal was to connect technology with the nature of children - activity, joy and mischief, but also with the pursuit towards development and wisdom."

Cronimet is the main sponsor of Rally Estonia for the third consecutive year. The seventh round of this year's WRC 50th anniversary season will be held on the roads of Tartu, Otepää, Elva, Kanepi, Kambja, Peipsiääre and Mustvee rural municipalities on 14-17 July.

The start and finish podium are located in the city centre of Tartu on the Town Hall Square, where, in addition to unprecedented entertainment, all those interested can also see the unique ’’Nutikas kratt’’ sculpture with their own eyes. The exact program can be found here.

Cronimet and Rally Estonia are the founding members of the Green Tiger environmental initiative which aims to develop a new sustainable economic model for Estonia.