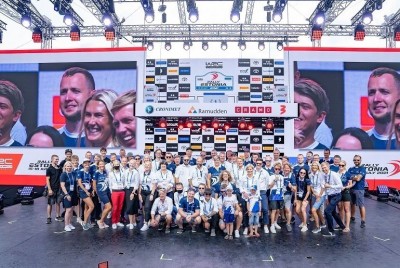 WRC Rally Estonia measures the carbon footprint of its event and has again set targets for its reduction. The 2-star level was achieved in the FIA ​​environmental accreditation program in 2021 last year and we are aiming for the 3-star level this year. The organizing team compensated last year's 900 tons of CO2 emissions through forest planting. For this purpose spruce was planted on two hectares of non-forest land (with a planting density of 2000 trees per hectare), total of 4000 trees. This autumn Rally Estonia team aims to plant 8000 trees.

Increasing the use of solar and renewable energy

The team of Rally Estonia pays attention to energy efficiency and increasing renewable energy by using solar and renewable energy. In 2022 the aim of the electricity usage of the Estonian National Museum (ERM) and Service Park is to use 50% renewable energy. The PowerStage finish at Leigo spectator area will be made on 100% renewable energy in cooperation with Solarstone. Solarstone offgrid solutions are used for the latter. In 2021 122 kwh of solar energy was produced at Leigo.

"The green strategy with smart mobility and energy solutions is at the heart of both Rally Estonia and the entire WRC series," Urmo Aava, Director of Rally Estonia, confirms.

Old electronic devices will be reused

The campaign for collecting old electronic equipment was organized in cooperation with Ringy team before this year's Rally Estonia in order to recycle metals, which became an important added value in the production of unique WRC Rally Estonia winner's trophies. During the campaign it was possible to collect thousands of mobile phones and thereby save 11.32 tons of CO2.

In order to reduce carbon dioxide emissions Rally Estonia uses as many hybrid or electric cars as possible in the organization of the event in cooperation with the official car partner Toyota Baltic.

The organizing team reduces fuel consumption by participating in online meetings. The car use of Rally Estonia team can be automatically measured through the software system under development and allows to optimize the necessary movements.

Rally Estonia's software, developed and constantly improved since 2019, enables to keep and manage the entire organization team consisting of nearly 3500 people during rally week in the IT system. This makes it possible to manage a very large part of the event-related pre-planning and rally-time organization electronically and therefore to significantly reduce driving.

The software developed by Rally Estonia has enabled to reduce the use of paper to a minimum. All data can be used electronically and only essential documents are printed out.

The goal of 2022 is to increase sorting options and thus the share of separately collected waste. Rally Estonia has also set this task for suppliers. Separate collection of waste has been organized in the spectator areas. Rally Estonia has two central waste stations - one in ERM and the other in Vana-Otepää.

Let's enjoy the exciting WRC Rally Estonia together, doing it more sustainably and with a smaller environmental footprint!