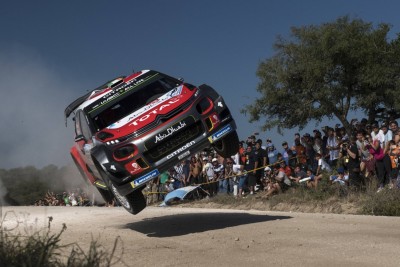 Craig Breen and Scott Martin with Citroën C3 WRC and Citroën Total Abu Dhabi World Rally Team are the next WRC drivers in the entry list of Shell Helix Rally Estonia, held on 13-15 of July. The biggest autosport event in the Baltics has earlier announced the entry of Hayden Paddon and Seb Marshall from Hyundai Motorsport with Hyundai i20 WRC. Breen and Martin won the second place in Rally Sweden this year and are looking forward to a great competition with fellow WRC drivers in Estonia.

This is a second time for Citroën to start in Rally Estonia. In 2012 Thierry Neuville and Nicolas Gilsoul were second with Citroën DS3 WRC from Citroën Junior WRT. Rally Estonia and its roads are familiar for Craig Breen. It will be his third start in Estonia, in 2011 he was competing with Ford Fiesta R2 and Gareth Roberts. In 2015 when Rally Estonia was round of FIA European Rally Championship were Breen and Martin driving Peugeot 208 T16 R5 car.

Craig Breen, Citroën Total Abu Dhabi World Rally Team: „I am very happy to go back in Estonia. I did this rally two times in the past and have good memories. This is a very good opportunity to get time on fast road, this is a good preparation before Rally Finland. I am really looking forward to Rally Estonia.“

Pierre Budar, Director of Citroën Racing: „We are happy to participate in Shell Helix Rally Estonia. This is a full-scale test session, with the opportunity to have a wider variety of roads than on a conventional test session. It’s ideal for preparing for Rally Finland. It’s also an opportunity for Craig to drive more. Like said before, during the rally we can do more different stages in opposite to a test session, where the driver knows perfectly the road after few runs.“

Mihkel Vaks, member of the board of Veho Eesti, Baltic importer of Citroën: „Citroën has been for years a car partner for Rally Estonia and we are very happy that our strategic cooperation can be even better with Citroën Total Abu Dhabi World Rally Team starting in Shell Helix Rally Estonia. This is a sign that the goal of Urmo Aava and his team to host a WRC event in Estonia is supported from the teams. For us and Citroën it is the privilege to help this dream come true.“

Urmo Aava, Director of Shell Helix Rally Estonia: „To have Citroën Total Abu Dhabi World Rally Team and Hyundai Motorsport in our entry list gives us great opportunity to bring the top competition from WRC drivers and cars to Estonia. Both Hayden and Craig are fast drivers and we’re working hard to offer them good opportunities and great stages to compete and fight for the victory and also to test before Neste Rally Finland. The fact that Citroën is here for the second time is a recognition to our team. We take it as a trust what we are doing.“
Shell Helix Rally Estonia rally passes will come on sale after one week to online store on www.rallyestonia.com and to all Circle K stations all over Estonia.

The official opening and awarding ceremony take place in Tartu, the second biggest town in Estonia. Tartu is an entertainment centre of Shell Helix Rally Estonia, the main artist of the official concert is Russian superstar Nyusha. Otepää which is known as a winter resort offers great opportunities for the technical centre of rally. Service park and HQ are located in Otepää at Tehvandi Sport Centre. Besides Tartu, Elva hosts another Super Special and the gravel stages in South-Estonia are considered as the best in Estonia.

Shell Helix Rally Estonia held on 13-15 of July is a round of Estonian and Latvian rally championship and FIA European Rally Trophy.