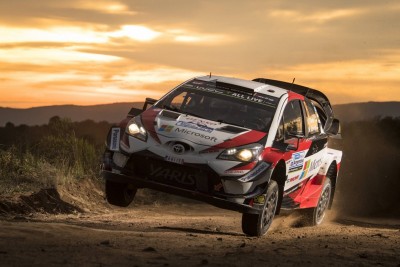 This year’s Shell Helix Rally Estonia held on 13-15 of July will be a high-level competition as Hyundai Motorsport and Citroën Total Abu Dhabi World Rally Team have already announced their participation with Hayden Paddon-Sebastian Marshall and Craig Breen-Scott Martin. The newest addition to the entry list are domestic heroes and three-time WRC rally winners Ott Tänak-Martin Järveoja from Toyota Gazoo Racing World Rally Team. This is the first time when the new Toyota Yaris WRC is competing outside the WRC series.

The news about Tänak and Järveoja means that 3 out of 4 manufacturers competing in WRC will be present at Shell Helix Rally Estonia. This guarantees top-level competition and is a sign of confidence towards the organisers of the rally. For Ott Tänak and Martin Järvoja, starting at their home event is important for many reasons.

Ott Tänak, Toyota Gazoo Racing World Rally Team: “ It has been always really fun to drive on the roads of Estonia. I am happy that we are able to attend this time with our team and Toyota Yaris WRC in Rally Estonia. This is a great opportunity to bring the real WRC to our home roads and it seems that this year’s entry list is going to be really strong. For the team, it’s a good way to gain the data and experiences in a real competition. Our biggest target for Rally Estonia is to get back the feeling of driving in the fast roads after mountain events, but we would definitely like to finish on the top of the podium in our home event and offer the best rally experience to our fans in home event.“

Martin Järveoja, Toyota Gazoo Racing World Rally Team: „Starting at Shell Helix Rally Estonia is a good way to give something back to our fans in Estonia. I hope we can offer them a weekend full of excitement and good emotions. For us it is great opportunity to find the right feeling for Rally Finland. The fact that two other manufacturer teams are also here gives us a real comparison which is something you can’t have in regular tests between rallies. For me personally it is very special that I can compete with Toyota Yaris WRC in my hometown Elva where one super special of the rally is held.“

Tommi Mäkinen, Toyota Gazoo Racing World Rally Team team principal: “Estonia is a true rally country and participating in Rally Estonia is a good way to give something back to Ott, Martin and to all Estonian rally fans also from the team side. We know how popular Ott and Martin are in Estonia, and we want to offer all spectators and fans a huge experience with the local drivers.”

There is a lot of work and long-term contribution from many people behind this great news.

Oleg Gross, entrepreneur and long-time supporter of Ott Tänak: „This is a great way to see Ott and Martin competing in Estonia while they are top drivers of WRC. There is a lot of effort behind this and I would like to thank Toyota Gazoo Racing World Rally Team team also for this. I’m sure everybody is looking forward to see them here in Estonia. For me personally it is very emotional feeling, Ott and everybody else have worked hard for those moments. Shell Helix Rally Estonia is a very important sporting event in Estonia and I invite you all to the stages in order to show our support to the drivers, teams and organisers.“

Marek Maide, member of the board of Toyota Baltic AS: „Toyota Baltic is very glad that we were able to help to bring Ott, Martin and Toyota Yaris WRC to Shell Helix Rally Estonia. This is a great opportunity for Estonian fans to follow top level competition and to cheer Ott and Martin on stages. We are keeping our fingers crossed that Ott and Martin could celebrate their victory at Shell Helix Rally Estonia and hope that this high-level event with great location and organisation will be added to the WRC calendar in the future.“

Urmo Aava, Director of Shell Helix Rally Estonia: „This is like a dream come true. For us every competitor is important but having Ott and Martin with Toyota Yaris WRC was one of the main goals for us. Three teams out of 4 manufacturers, it means great competition and it is something special for the fans from all over the Baltics and Europe. It is also a responsibility for us as an organiser. During the years we have developed our rally in many directions – safety, organisation, IT-solutions and the roads. We have restored the characteristic South-Estonian stages, flowing over the hills and driving them with the right rhythm will be fun. Also we have created new spectator spots with everything necessary from parking and entertainment. It all helps us to achieve our main goal – to be one the best gravel rallies in the world. With Ott and Martin and their rivals from WRC competing it is a must-go event for every rally fan.“

The official opening and award ceremony will take place in Tartu, the second biggest city in Estonia. Tartu is an entertainment centre of Shell Helix Rally Estonia and the main artist of the official concert is Russian superstar Nyusha. Otepää which is known as a winter resort offers great opportunities for the technical centre of the rally. Service park and HQ are located in Otepää at Tehvandi Sport Centre. Besides Tartu, Elva hosts another Super Special and the gravel stages in South-Estonia are considered as the best in the country.