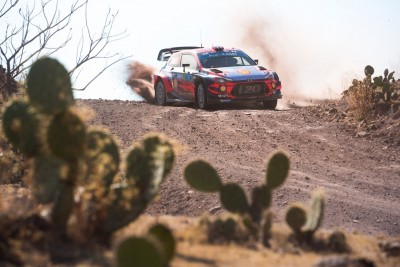 Andrea Adamo, Team Director of Hyundai Motorsport:“We are happy to join Rally Estonia again this year because it is always great to participate in such events, which are well organized and witnessed by so many passionate spectators. This will be a good opportunity for us to prepare for Rally Finland a month later and put us into the right rhythm. The level of the event this year will be even more interesting as there will be quite a few WRC competitors there.”

Andreas Mikkelsen: “I’m really looking forward to compete at Rally Estonia in July. Rally Finland is such a special rally, being so fast and the roads are so wide, that going to Rally Estonia will be great to get into the rhythm on very similar conditions. It might be a bit more sandy in some places but still I am sure it will really help our Finland venture. I have done a rally in Estonia back in 2006 and have not been there in a really long time and I really look forward to it. From what we have seen from Estonian fans around the world, I’m sure their passion will welcome us all.”

Shell is an important partner for both Shell Helix Rally Estonia and Hyundai Motorsport.

Winfred Gorissen, Shell Distributor Account Manager Nordics & Baltics: „At Shell Lubricants we are very proud to be sponsor of Shell Helix Rally Estonia for the second consecutive year. In 2019 Shell Helix Rally Estonia has been recognized as the Official WRC Promotional Event! It is a great achievement for the local team that worked hard in the past two years on such huge event, but also for our brand Shell Helix that will be so close to many rally fans in the region. Shell scientists work closely with the technicians at Hyundai Motorsport on their lubricant requirements for use in competition, testing and development:  we work on and off the competition for transferring what is learnt into high quality products. At this year Shell Helix Rally Estonia, Hyundai Motorsport will also attend the event, with Andreas Mikkelsen and Anders Jaeger-Amland as driver and co-driver. We are confident that the rally will be successful again, and we are looking forward to join the event with our official Distributor Jungent, customers and fans”.

Director of Hyundai Motor Baltic Erkki Ots says that the atmosphere at Rally Estonia is comparable to Rally Finland.

Erkki Ots, Hyundai Motor Baltic director:“We are glad to see Hyundai Motorsport back in Estonia with Hyundai i20 Coupe WRC. The team has strong connections with Estonia and they have compared the atmosphere here with Rally Finland. We thank the organizers for the effort bringing the Official WRC Promotional Event to Estonia and we will support them in every possible way to bring WRC cars to Estonia. We hope that this effort from everyone helps to bring a WRC official round to Estonia.”

Shell Helix Rally Estonia director Urmo Aava admits that it is pure pleasure to provide news like this to rallyfans.

Urmo Aava, Shell Helix Rally Estonia director:“Announcing another WRC team next to Esapekka Lappi and Janne Ferm (Citroën C3 WRC) feels good. I believe that we will manage to arrange a warm welcome to Hyundai Motorsport as we did last year. I’m sure for Andreas and Anders it is a good way to get the right feeling before Rally Finland and also that Estonian fans are looking forward to see them and Hyundai i20 Coupe WRC competing at Shell Helix Rally Estonia.”