Only in Estonia – rally trucks! 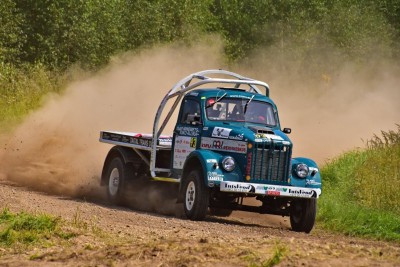 The fact that Estonians are very keen rally fans is no secret. But there is one thing that separates Estonia from other countries. Estonia is only country where rally trucks are competing for the points in the national championship. It is a tradition which has started back in 60’s. Yes, the cars used for that are bit changed but they look quite same. GAZ trucks, produced in Soviet Union are spectacular to watch and their fan club gets bigger with every rally. Total 15 rally trucks are in the entry list of the Shell Helix Estonia, held on 12-14 of July in South Estonia.

The rally trucks nowadays look very attractive and their owners have worked hard for the speed and looks of trucks. From the technical side are the cars very similar to originals with some adjustments. The trucks can have different gearboxes, most of them have six-gear gearboxes. Also is permitted to use the power steering. All other parts are mostly original with small adjustments. This allows to produce approximately 250-280 BHP and the top speed of those trucks is in ideal conditions 150-160 km/h. Those numbers allow the trucks to show very attractive driving and it is the reason why so many people want to stay on the stages until the last car. GAZ 51 which mass production started in 1946 and its successors have special place in Estonian autosport.

“Truck rally and autocross has a special place in Estonian autosport. It can be taken as a keeper of the traditions. This class has been almost same from the 60’s. Of course, trucks nowadays are bit different and modified. This is the class where most of the work has done by the people in the team and drivers themselves. Basically, you can build your own rally truck and it gives for an example a good technical base for young people. Those trucks are worth to watch for sure.”

Total 15 rally trucks are in the entry list of Shell Helix rally Estonia.