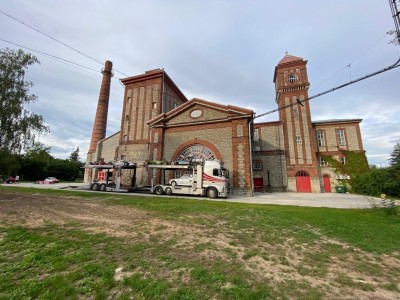 The exhibition "Estonian Motorsport 1921-2021" of MOMU - Motorsport Museum will be opened at the Estonian National Museum (ERM) on August 25th. Celebrating together the 100th anniversary of Estonian motorsport in 2021, with Rally Estonia, the first ever FIA World Rally Championship round in Estonia occurring from the 4th – 6th September.

From the 25th of August to 13th of September (except 01.09-07.09 when ERM will be the Rally Estonia headquarter and closed) you will be able to see 100 years of the most important Estonian motorsport exhibits brought in from their usual location, MOMU in Turba, Estonia. You can see a large variety of formula cars, rally cars and motorcycles, and much more, which has left its important mark in the history of Estonian motorsport. During Rally Estonia, the participants of the WRC rally can also get acquainted with the exhibition, to not only show that Estonia has strong athletes and good organizers, but also as a manufacturer of valued racing cars.

On August 28th, 1921, the first motorsport competition was held in the young Republic of Estonia, Tallinn - Rapla - Tallinn Rally. It is largely considered as the start of Estonian domestic motorsports. The exhibition is dedicated to the soon-to-be first one hundred years of Estonian motorsport. In addition to the large number of enthusiasts, the racing equipment industry was also very developed in Estonia. The first factory to manufacture racing machines was Saar & Co, which made racing motorcycles, Tempo, were being built before 1940. During the USSR times, the production of racing equipment expanded greatly when the Estonian engineering culture quickly developed and many companies were engaged in production: Tallinn Car Repair Testing Plant, Tartu Car Repair Testing Plant, a small company Kavor, joint ventures ESTTEC and Viro, and factories Vihur and Teras. In addition, smaller more limited quantities of racing equipment for many various fields were manufactured by smaller companies and motorsport clubs.

The largest car racing equipment manufacturer in Estonia was the Tallinn Car Repair Test Plant (abbreviated - TARK), whose production of formula cars reached a total of 1,331 cars, and in addition, roughly 4,000 karts were built for youth sports. In 1985, the factory became the second largest in the world in terms of formula cars produced (The largest at the time was Lola located in the UK).

Today, these traditions are kept alive, and one of the best examples is the Formula Student team, whose members have built highly innovative machines over the years, from internal combustion engine formula cars to self-driving electric formula cars.

The exhibition also features a large variety of model cars from collector Rauno Paltser. More than 100 models related to Estonian rally drivers can be seen, from Uno Aava's 1967 East African Safari Rally Moskvich model to Ott Tänak & Martin Järveoja's 2020 WRC Sweden Hyundai i20 Coupe WRC model. The exhibition also features 5 models of Markko Märtin - Michael Park’s winning cars from their time in the WRC, as well as all 12 winning models of the Ott Tänak - Martin Järveoja’s WRC cars. As the exhibition at the ERM is related to Rally Estonia, you can also see the Suzuki, Citroen and Ford models driven by Rally Estonia director Urmo Aava during his career, as well as 10 different models with Rally Estonia history.