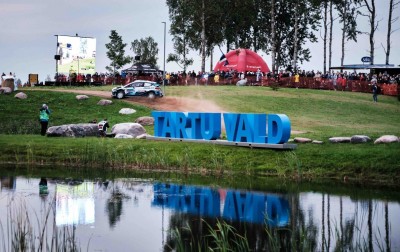 Championship leader Ogier and Lappi were quickly back into the groove following a six-month Covid-19 pause. They could not be separated through the tight and twisty 1.29km Tartu vald parkland stage on the edge of the city.

“It’s good to be back and fighting,” said Ogier, driving a Toyota Yaris. “Everything is ready, the car feels good and we’ve had good preparations, so let’s go for it.”

Lappi surprised himself with his performance in his Ford Fiesta, after less preparation time at the wheel than most of his rivals.

“It didn’t feel that good to be honest,” explained the Finn. “This is not what the stages will be tomorrow but we had a good shakedown and a good opening stage, so I’m looking forward.”

Just a tenth of a second behind in third was Ott Tänak’s Hyundai i20, the Estonian excited by the prospect of competing in front of his home fans on a WRC round for the first time.

“It’s special. It will be a tough few days, the competition will be tight but it’s definitely our opportunity so we need to make the best of it,” he said.

Team-mate Craig Breen was fourth, despite appearing to struggle to get off the startline, with Elfyn Evans’ Yaris next up in fifth.

• Full coverage from Rally Estonia will be available on WRC+ All Live here, including every stage broadcast as it happens as well as key interviews, features and expert analysis from the service park.