In just three weeks, at the FIA World Rally Championship round, fans will see an unusual crew 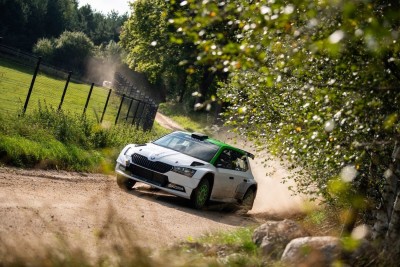 Alexey Lukyanuk, the FIA ERC leader, will participate in the Rally Estonia. For the first time in his career, he will start at the wheel of Skoda Fabia Rally2 Evo from the Latvian team SRT. This will be the third car of this class that Alexey Lukyanuk will drive – before that he performed in Ford Fiesta R5 and Citroën C3 Rally2 (that he is using at the FIA ERC events this year).

Another novelty will be the temporary change of the co-driver: Yaroslav Fedorov, the 2019 WRC2 prize- winner, will replace Alexey Arnautov in the right seat.

Alexey Lukyanuk, driver, “We are glad to announce that we will start at Rally Estonia in WRC3 category with SRT team in Skoda Fabia Rally2 Evo. This project will take place thanks to the initiative of Alexander Rzhevkin – many thanks to him for this unique opportunity. I will drive with Yaroslav Fedorov, because my permanent co-driver Alexey Arnautov cannot miss his work so often. A week after the Estonian round of the FIA World Rally Championship a rally in Italy starts, where we will go together. Fedorov has quite a lot of experience in the world rally so it will be interesting to work with him. I’m confident that we will do our best”.

Yaroslav Fedorov, co-driver, “Alexey is very fast, his speed is beyond doubt, and it is an honor for me to assist him in Estonia. Thanks to our extensive experience of performing in the Baltics, both of us are familiar with the local roads. I think Alexey will come to this round in a good shape after two gravel rallies in Poland and Latvia. It will be very pleasant to play for the SRT team again, even at one round. Also, for the first time, both of us will drive as neutral racers of the Russian Automobile Federation. We’ll do our best and try to show that an old horse makes a straight furrow!”

The idea to participate in this event came from Alexander Rzhevkin – the Russian entrepreneur in the field of computer technologies and philanthropist, who also acts as a rally driver. Alexey Lukyanuk often acts as Rzhevkin’s coach, so the latter managed to appreciate his driving talent, decided to support Lucas and give him such an opportunity. According to Rzhevkin, it can show the reigning European Champion in a vehicle of an equal class in the world series from the best side and possibly open up new opportunities for him.

Rally Estonia is the round of 2021 FIA World Rally Championship, which will be held in Tartu and in the rural municipalities of Tartu, Otepää, Elva, Kanepi, Kambja, Peipsiääre and Mustvee on 15-18 July 2021.