Celebrate the WRC 50th anniversary season together with us! 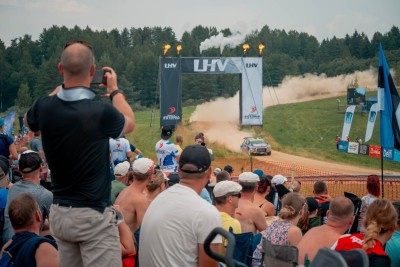 The opening stage of the new hybrid or Rally1 cars in Monte-Carlos turned into a duel between two Sébastienes, which was won by 47-year-old Loeb, for whom Isabelle Galmiche read a card for the first time. For the nine-time world champion, it was the 80th World Rally Championship of his career, and with this triumph, the Frenchman became the oldest World Rally Champion ever. Like the new generation WRC debut in 2017, Ford won the first rally of the Rally1 era. Kalle Rovanperä / Jonne Halttunen and Toyota won both the Swedish snow and the Croatian asphalt. While in Sweden the young Finns didn't have to put up with themselves on the last day of the competition, in Croatia they had to give 100% and be faster than the three-time winners of Rally Estonia, Ott Tänak and Martin Järveoja. In the end, the two pairs were only 4.3 seconds apart and for the Estonians, it was the first podium place of the season.

Egon Kaur / Silver Simm and Georg Linnamäe / James Morgan, who will compete in the WRC2 class this year, showed good results in Sweden in the second stage of the season and earned fourth and fifth place, respectively. Kaur / Simm even fought for the absolute 10th place, for which one World Championship point would pay off.

Linnamäe / Morgan took the start of the Croatian World Rally Championship from the first place in the shared WRC2 Junior. Although the opening day of the race was unfinished due to the trip in difficult conditions, in the penultimate attempt the Estonian / British crew showed an absolute 7th time in a Rally2 car and became richer in the whole rally.

After two stages of the WRC3 Junior or JWRC season, Robert Virves / Aleks Lesk hold third place in the World Championship standings. While in Sweden the Estonians were in sixth place, Virves / Lesk felt very good on the Croatian asphalt and were on their way to the first World Cup stage of their career, but unfortunately had to accept a four-minute penalty before making their last attempt due to a mistake. The World Championship season 2022 will continue for all the above classes on May 19th to 22nd in Portugal.

On the third weekend of July, the domestic and foreign rally fans will be able to see the new Rally1 hybrid cars competing in Estonia for the first time, WRC Rally Estonia will be taking place from the 14th to 17th of July. The rally will start on Thursday evening, when all the pairs participating in the World Championships and the Estonian Championships will start on the opening ceremony and podium in the Tartu City Center,  Town Hall Square. On the same evening, the opening stage of the rally will be driven near the Estonian National Museum, in the Raadimõisa park. On Friday, in addition to the legendary Rally Estonia stages, the stages near the Lake Peipus, which debuted last year, will be waiting for the competitors. On Saturday, the rally will move towards South-Estonia and the race will end on Sunday with a 15.95 km long Kambja special stage, which is this year's WRC Rally Estonia Powerstage. The Powerstage finish will be at the picturesque lakes of Leigo, where the Powerstage podium is also located on the island of Leigo. This year, WRC Rally Estonia will run a total of 24 special stages and cover approximately 323.76 special stage kilometers. Participants in the Estonian championship will compete in seven special stages and their competition will end on Saturday, followed by a finishing podium on Saturday night at Tartu Town Hall Square. The absolute best of WRC Rally Estonia 2022 will be awarded at the WRC Rally Estonia finish podium in Tartu Town Hall Square on the afternoon of Sunday, July 17th.

This year, it is a pleasure to organize a more ’’classic’’ rally, and therefore the organizers have created nearly 80 unique spectator areas for all rally fans, from which each spectator can put together a pleasant program for the entire rally weekend. The spectator areas are divided into three different categories - ARENA, AREA and SPOT - according to their size and range of services.

Rally passes and VIP tickets are on sale in the Rally Estonia e-shop, and starting from the 19th of May, they will be available also in every Circle K station in Estonia.

In addition to the exciting rally competition, WRC Rally Estonia  has a lot of unforgettable entertainment and GREATEST experience to offer to all rally fans and tourists. On the opening night of WRC Rally Estonia, everyone can experience the grand opening ceremony of the event, as well as the opening concert in the center of Tartu with the best Estonian artists. In addition, the EXPO area in Tartu city center is open - Sportland Fan Store, WRC Fan Store, Catering, Children's Area and much much more – everything located in the Tartu City Center is accesible for free. However, although the start and finish podium has moved to Tartu Town Hall Square, then the Service Park and race control will remain in their former location on the territory of the Estonian National Museum.