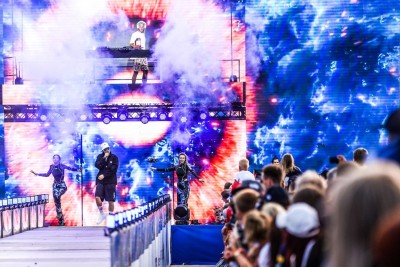 5MIINUST, Alika Milova and Rita Ray will give a free concert on three nights at Tartu Town Hall Square as part of Rally Estonia, the round of the World Rally Championship starting this Thursday.

The start and finish podium of Rally Estonia will become the entertainment epicentre of Tartu and all of South Estonia for the long rally weekend, involving plenty of activities for the whole family. The kick-off will be on Thursday, 14 July at 15.00, when the rally EXPO opens its doors next to Town Hall Square on Autovabaduse puiestee, the keywords of which this year are innovation and technology. At 17:30 top WRC drivers will sign autographs for fans next to the podium of Town Hall square and at 18.00 the spectacular opening show of WRC Rally Estonia 2022 will begin there.

The first entertainment block of the festive opening ceremony includes 5Miinust, Trad.Attack!, Grete Paia & Púr Múdd, Bedwetters ft. YASMYN, Jüri Pootsmann, Shaté Dance School, string quartet and Tartu boys choir. Then, on the start podium, you can see all the racers of this year's Rally Estonia, who immediately move from the stage to the first stage in Raadi manor park. The live broadcast of the latter can also be seen at Town Hall Square.

The crown jewel of the first rally night is the concert beginning on the start podium at 22.30. 5MIINUST will give a special show specially created for Rally Estonia with a live band, DJ and Shaté Showgroup, and Jaan Pehk, i.e. Orelipoiss will step on the stage as a special guest.

On the evening of Friday, 15 July, the opening and closing events of Tartu Superenduro 2022 will take place on the start and finish podium of Rally Estonia. The amazing and talented Alika Milova, the winner of season 8 of Estonian Pop Idol, will perform in-between for the audience at 22.00.

On Saturday, 16 July, there will be a start podium for vintage vehicles and an outdoor exhibition on the Town Hall Square. At 20.00 Rita Ray, one of the most unique artists in Estonia in recent years having quickly won the hearts of the audience, will perform on Tartu Town Hall Square. After the concert the awards will be presented on the same podium to the best rally drivers who participated in Rally Estonia within the Estonian Championship.

On Sunday, 17 July, the festive closing ceremony of the rally will be ushered in by a special dance show by Shaté Dance School starting at 16.00 and at 17.00 the winners of this year's Rally Estonia will appear in front of the crowd on Town Hall square.

All information, program and schedule can be found on: https://www.rallyestonia.com/en/spectators/general-information/programme/