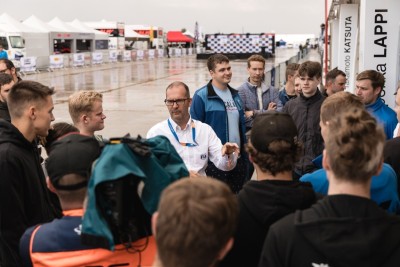 The FIA, Rally Estonia organisers and Estonian Autosport Union welcomed 20 students from the renowned universities of Tartu and Tallinn to Rally Estonia this weekend (July 14-17) as part of a new initiative for the FIA World Rally Championship.

A conference with the students was led by Robert Reid, Deputy President for Sport at the FIA, Janis Kaal, CEO of the Estonian Autosport Union, and Andrew Wheatley, FIA Rally Director, within the Rally Estonia Headquarters to explore key areas of technology such as hybrid powertrains and sustainable fuel.

The latest developments in these technologies could also be seen at first hand by the students when they were welcomed by the competing teams in this year’s WRC. Toyota Gazoo Racing, Hyundai Motorsport and M-Sport Ford all granted the students access to their service areas, where senior engineers were on hand to ensure that a full understanding of the new-for-2022 Rally1 hybrid technology and zero-fossil fuel could be shared, and ideas exchanged.

Robert Reid said: “Motorsport exists to inspire people and to drive forward technology and as such the activity with the students here in Tartu is something that I am keen to see roll out at all WRC events in future.

“The work that we are doing, together with the teams and manufacturers, in order to arrive at net zero carbon emissions in our sport by 2030 is quite extraordinary. But it is also an ongoing process that will require the passion and energy of tomorrow’s engineers to achieve, and by creating that dialogue with students we hope to inspire them to contribute to these goals, whether in motorsport or beyond.”

Janis Kaal said: “Rally Estonia is a landmark event for our country, as it has been since joining the WRC calendar in 2020. We welcome the opportunity to build on the sporting and social occasion of the event to support academic and engineering students.

The students were representatives of the Formula Student Team Tallinn – a community of the “Tal Tech” Tallinn Technical University – and Solaride Academy, a joint program of the University of Tartu, Tal Tech & the Estonian University of Life Sciences.

This event was a first toe in the water, but we share the FIA’s vision of motorsport as a platform for ideas and inspire new generations to help deliver new solutions for the future.”

See the photo gallery of the meeting here.